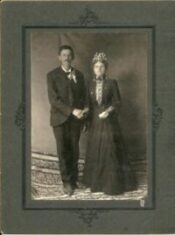 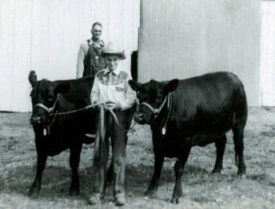 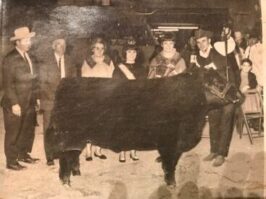 In 1906 Richard and Lena Gerloff purchased the land known as Gerloff Farms.  Here, they raised 7 children in which all were born on the land but one.  The 7 children were Arthur, Alfred, Selma, Orilla, Oscar, Hilda and Elmer.  During the late 1920’s Richard was diagnosed with TB and left for Albuquerque, NM where he acquired treatment.  The children stayed home and took care of the farm.  Unfortunately, Richard succumbed to his illness and died at an early age.  This left Lena to care for their 7 children during the depression and run the farm.

In 1947 Alfred returned to the farm with his wife Esther and three children Katherine, Mildred and Charlie.  In 1957 Alfred and Esther went to the East Central Angus Sale and bought 5 Angus heifers.  Shortly thereafter, they got Charlie involved in 4-H.

In 1967 Charlie married Rena.  They have three children Lance, Mindi, and Kimberly.  In the 1970’s the hog operation expanded. In 2014 the operation added the Simmental Bloodline.

Currently, the farm is operated by the 3rd, 4th and 5th Gerloff generations.  The farm prides itself in offering you cattle that work in your environment and build your bottom line.  You can buy our cattle with confidence knowing that Gerloff Farms genetics will succeed in your pasture and grab the attention of your calf buyer.  Our generational team works hard to maintain the legacy of being “Dedicated to the Livestock Industry since 1906” like the generations before them.

Located east of Jefferson City, in the hills and valleys of central Missouri, we encourage you to stop in and visit and see what we have to offer. 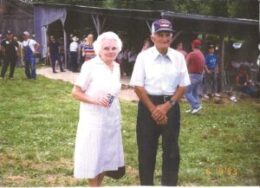 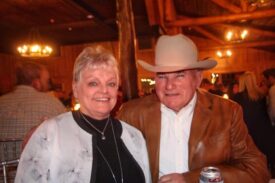 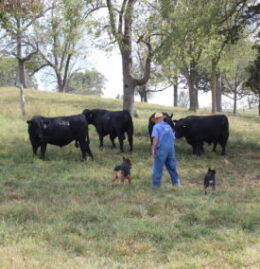